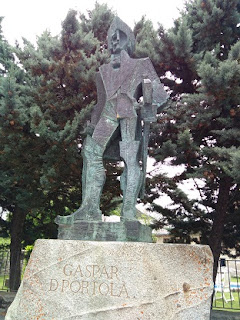 Apart from the spring weather that spreads through the region known as the Bay Area, we will talk about the words we have found during our trip to California. As soon as we approach the San Francisco Bay we will find many place names that, despite being written in Spanish, are pronounced in the Catalan way, which would show the original word was Catalan. For example, in the city of Walnut Creek, located in the Contra Costa County, we find Bonanza Street. Obviously that name immediately draws the attraction of those of us who, as kids, watched an American western television series also called Bonanza, which was released on Spain's TV in 1962. The series name remained Bonanza in the Spanish dubbed version. However, years later, when we enjoyed the English original version, we found that the Americans pronounce Bonanza almost as we would also pronounce the word "bonança" in Catalan. Until here.

Another interesting place name is Point Reyes. This so special place on the Californian coast is written like this, but they are spoken as Point "Reis" ... We also note that the bay is said to correspond to the name of Francis Drake, the English corsair. But we really realize that, apart from the name of Francesc Drac translated into Catalan, the shape of the coast in that place has precisely the shape of a Dragon's head, as Drac and Dragon have the same meaning. Right next, another find. We find the Bolinas Lagoon, an estuary similar to the low rivers of Galicia, beautyful. The surprise is that in ancient texts Baulenes is written, that it is a Catalan last name, common in Osona. So many coincidences can not be casual, but derived from the Catalan track in California.

Another point catch on the fly was that of the Companyia Franca de Voluntaris de Catalunya. From here will leave the family of José Antonio Yorba, written and pronounced thus, makes us realize immediately that he speaks of a Catalan last name, Jorba. By Antoni Francesc Josep Jorba i Ferran, born in Sant Sadurní d'Anoia. He gave a name to a California population, Yorba Linda, who could well be joining the town of Jorba ... What can we say about Miquel Constansó, born in Barcelona ...? Another well-known family was the Moragues. Those that gave name to the population of Moraga in the county of Contra Costa. We speak of a family ranging from grandfather Jose Joaquin de la Santísima Trinidad Moraga, to son Gabriel and Joaquin grandson. Granny was called Maria Pilar Leon and Barceló ...! If they were not Moragues, like our General Josep Moragues Catalan, they could also come from Mallorca. Even, in the following expedition of recognition done by Juan Bautista de Anza, you can find the friar Pere Font, born in Girona. This one baptized the California mountain range of "Sierra Nevada", that is, Sierra Nevada. As it is called in the famous Sierra de Granada.

Even the name of Gaspar de Portolà has been linguistically adapted. In Catalan we pronounce Portolà stressing the last syllable and marking it with a diacritic. Americans, however, have shifted the stress to the penultimate syllable and know him as Gaspar de Portóla. Note that there are no diacritics in English. This happens everywhere, for example, in the Catalan town of Sant Boi de Llobregat there is the reverse case of a street called O'Donnell, which in the original language, English, would be spoken stressing the penultimate syllable (we would mark the second o with a diacritical mark). However, Catalan speakers have shifted the stress to the last syllable (O'Donnéll). Linguistic adaptation between different languages is a rule of common sense, but it seems strange that historians often do not notice such important details. Sometimes, research by certain scholars causes historical figures to lose many characteristics of their personality, and so there are frequent gaps. Beyond a polyhedral or mosaic-like reality, many pieces are lost along the way. An example of this would be Steven W. Hackel's book on "Junípero Serra", which is good work except for the lack of Catalan culture knowledge and for how such culture was articulated within the Spanish Empire.

Fortunately, there is always an opportunity and a new field of work for the historians that will come. Historical research allows you to retrieve and unearth the treasures of the past. For example, the certificate of Baptism of Gaspar de Portolà in Os de Balaguer and the family roots between Balaguer and Arties in the Vall d'Aran, where he died. After a very intense military life, the explorer sought his retirement in a population with a cool climate until his last days.
NB: VO Sergi Turiella. Translation into English: Marta Pombo.
Posted by Sergi Turiella at 21:51:00 Cap comentari: